ASSEMBLYNET AD : Software to automatically detect/predict dementia in a t1w brain MRI and to provide a report containing two scores based on structure grading and structure atrophy.

AssemblyNet-AD is a deep learning-based segmentation tool that is able to automatically detect dementia signature (Alzheimer’s Disease (AD) and Fronto-temporal dementia FTD) in a T1w MRI. Dementia detection is based on 2 different types of features: grading of all the brain structures and atrophy of key structures (hippocampus, amygdala and inferior lateral ventricles). To obtain a score for each feature, a collective artificial intelligence framework is used for the grading and multiple lifespan models are used for the atrophy. AssemblyNet-AD is integrated within the web-service volBrain. First, the user provides a 3D T1 MRI to the system. The system will first preprocess the image (denoising, inhomogeneity correction, registration) and then will segment brain structure and finally will estimate score for grading over the brain and atrophy of key structures. After few minutes, the results are sent back to the user by email. This email contains a report as pdf and csv files with scores of having dementia (AD or FTD). Moreover, the pdf file provides screenshots to enable a fast and efficient quality control by the user.

AssemblyNet-AD is a pipeline designed to automatically detect/predict dementia in a T1w brain MRI. It gets an anonymized MRI brain volume in NIFTI format and produces a pdf report containing two scores based on structure grading and structure atrophy.

Grading Score: First, AssemblyNet-AD produces a grading score based on deep learning models trained to discriminate Alzheimer's disease (AD) signature. The grading map provides a score for each structure that reflects the similarity of the subject under study to a population with dementia (i.e., if the T1w MRI content presents AD-like patterns). 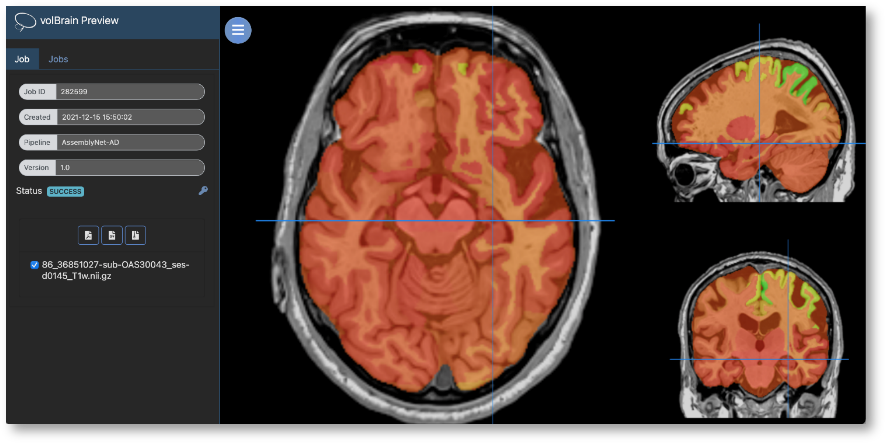 Once the process is finished you will be notified by e-mail so you will be able to download a package including some image files and two (CSV and PDF) reports gathering all the dementia scores values calculated.