Our software produces automatic quantitative analysis of MRI data for researchers and practitioners. This automatic and quantitative analysis of brain structure can be useful for many pathologies. Based on the latest advances in AI, AssemblyNet has a huge potential since is able to automatically extract all the brain structures in few minutes (12min). It has to be noted that AssemblyNet is one the most accurate available software. Its performance reaches human expert accuracy, and the produced segmentations are robust to pathology such as Alzheimer’s disease. The volume of brain structures has the potential to be an important biomarker for several neurological diseases (multiple sclerosis, Alzheimer’s disease, Parkinson, etc).

AssemblyNet is a pipeline of processes aimed to automatically analyze MRI brain data. It works as a black box from the user point of view as it gets an anonymized MRI brain volume in NIFTI format and produces a pdf report with the volumes of all the brain structures. The average processing time of the whole pipeline is around 12 minutes.

AssemblyNet provides full brain structure segmentation using T1w MR images thanks to a large ensemble of deep learning networks. AssemblyNet is shared as a docker image. The user provides a 3D T1, as a compressed nifti file, to the system. The system will first preprocess the image (denoising, inhomogeneity correction, registration) [using volbrain v1.0 preprocessing] and then will segment 133 brain structures.

AssemblyNet is also integrated within the web-service volBrain. There, the user uploads a 3D T1, as an anonymized nifti file, to the system. In the same way, the system preprocesses and segments the image. After few minutes, the results are sent back to the user by email. 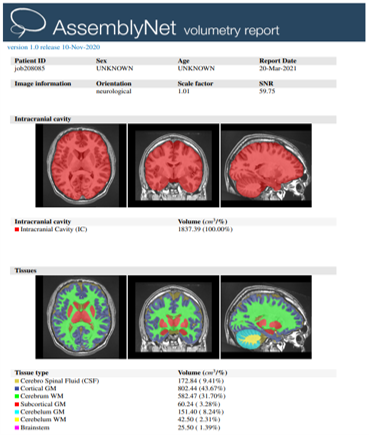